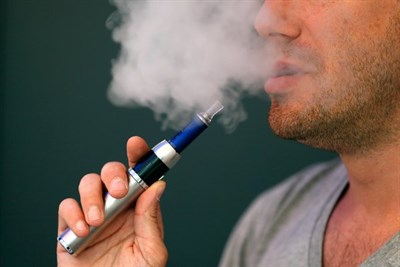 E-cigarettes are battery-powered devices that vaporize a nicotine solution to replicate smoking. Most do not work by combusting tobacco and using them is not considering smoking, according to the law firm Fisher & Phillips LLP. The business of “vaping” is booming.

But vaping is also confusing, both to consumers and employers. Is it safe for users and those exposed secondhand, or not? The jury is still out. The World Health Organization in December 2013 said that e-cigarettes are safer than traditional cigarettes, but that they still deliver some toxins. The U.S. Surgeon General has categorized e-cigs as tobacco products, and the U.S. Food and Drug Administration (FDA) has yet to weigh in with regulations, except for e-cigarettes marketed for therapeutic purposes. Wal-Mart, CVS Caremark and Starbucks ban vaping by employees. ExxonMobil allows vaping in smoking areas, and McDonald’s permits employees and customers to vape on its premises.

In fact, one out of every five adult smokers in the United States tried e-cigarettes in 2013, up from one in 10 in 2012, according to the Centers for Disease Control and Prevention (CDC). First marketed internationally in 2002, there are more than 250 brands of e-cigarettes now available in the U.S., and sales have tripled in a two-year period to approach $2 billion.

So what’s an employer to do?

By 2007, 91% of U.S. employees were subject to smoking restriction policies, according to a report from Pfizer, Inc. Media reports today describe employers facing a dilemma, controversy, complicated choices, wider implications and uncertainty. Employers are currently free to create their own policies to address the use of e-cigs—if e-cigarettes have not been included in state indoor smoking regulations as they have in Arkansas, New Jersey, North Dakota and Utah, or in more than 150 municipalities including New York City, Chicago and Los Angeles.

Many employers are on the fence regarding the use of e-cigarettes in their workplaces. But they may not be able to sit there much longer. “As vaporing becomes more prevalent… employers will be faced with the challenge of contemplating the pros and cons and will need to consider adapting a policy that reflects their position,” according to the Zanesville (Ohio) Times Recorder.

Here are steps you might consider taking, if you haven’t already addressed the use of e-cigarettes in your workplace:

• Evaluate your current smoking policy for consistency with state and federal laws. Be aware that in April, 2014 the FDA proposed to extend its tobacco authority to additional tobacco products, including e-cigarettes. “This proposed rule is the latest step in our efforts to make the next generation tobacco-free,” said Department of Health and Human Services Secretary Kathleen Sebelius.

• Examine the exact wording and extent of your company’s existing smoking policy and insurance plans. How does your policy define smoking? Policies may not be clear-cut. A policy might state that the company does not hire nicotine users, but some e-cigarettes don’t contain nicotine.

•Consider adding e-cigarettes to an existing no-tobacco policy. A policy banning e-smoking can be that simple. But be aware of potential legal issues coming at you from both sides. A ban on hiring e-smokers might face a legal challenge for infringement on the e-smokers’ rights. Non-smokers might file a complaint about e-cigarette use in the workplace. How could an employer ban e-cigs if they allow use of nicotine-infused gum or other prescription medicines at work as tools for smoking cessation?  These are questions you may want to consider or discuss with counsel.

• Clarify your objective when creating or modifying your workplace smoking policy to address e-cigarettes. Do you want to prohibit the use of tobacco, ban nicotine, or forbid smoke in the workplace? Do you want to ban anything that creates the illusion of traditional cigarette smoking?

• Know the ‘pros.’ Be aware that proponents of e-cigarettes point out there is no proof of associated health risks, and that these devices might actually improve productivity by eliminating the need for smoking breaks. Some of your employees might also tout vaping as an effective smoking cessation tool and resent policies that interfere with their attempts to cut down or quit smoking— although there are no long-term studies confirming or disproving that e-cigarettes can accomplish this.

• Know the ‘cons.’ Be aware that in contrast, opponents argue that e-cigarettes contain nicotine and small levels of known carcinogens and toxic chemicals, and banning their use eliminates the risk of complaints from non-smoking employees annoyed by e-cigarette vapors. Some workers simply find vaping unsettling and disruptive, based simply on how vaping looks. Most e-cigarettes are designed to look like their traditional tobacco counterparts and so allowing their use might seem to contradict non-tobacco use polices. Employees might also be confused about whether and where smoking is permitted and whether your company is complying with anti-smoking legislation.

• Research the ingredients. Know that most e-cigarettes contain a liquid cocktail of nicotine, propylene glycol, glycerin and nitrosamines. Propylene glycol and glycerin are commonly found in everyday items such as toothpaste and asthma inhalers. Nitrosamines, however, are known carcinogens. These compounds are only used in tiny amounts in e-cigarettes, and the danger of them in this limited quantity is not currently known. “The bottom line is we don’t know enough about these products,” says Erika Sward, assistant vice president for national advocacy at the American Lung Association.

• Put thought into the proper disposal of e-cigarette batteries. Batteries should be discarded like other electronic waste, if you choose to permit a form of e-smoking.

• Give employees advance notice of any policy changes – typically three months or more.

Many organizations have yet to address the e-cigarette issue, but don’t wait for definitive research on their health effects. Experts at the CDC say it will take decades to look at the effects being debated, and answers won’t be clear for another 10 or 20 years.

For more organizational development and training information, contact us here.